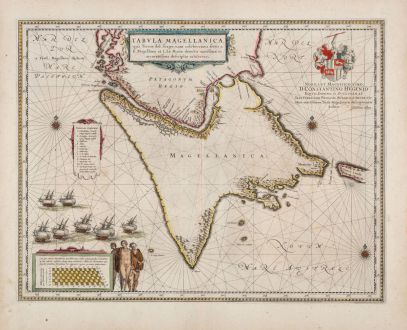 Blaeu's splendid map of Tierra de Fuego with the Strait of Magellan.

Old coloured sea chart of Tierra de Fuego with the Strait of Magellan and Le Maire Strait by Willem Blaeu. From the French edition of Theatrum Orbis Terrarum, titled Theater du Noude Atlas, printed between 1643 and 1650.

Shows the islands at the southern tip of South America. Tierra de Fuego (formerly Magellanica) is separated by the Strait of Magellan from Patagonia, the mainland. The highly decorative map is decorated with a fleet of ships and rhumb lines with three compass roses. The map is considered to be one of the most beautiful of the region. With two cartouches and a dedication to Constantino Hugenio (Constantijn Huygens), the secretary of the two Princes of Orange, Frederick Henry and William II.

Ferdinand Magellan discovered and explored the sea route between the mainland of South America and Tierra del Fuego during his circumnavigation of the globe. The natural passage between the Atlantic and the Pacific Ocean is named today Strait of Magellan. Magellan himself died during this journey on 27 April 1521 in the Philippines.