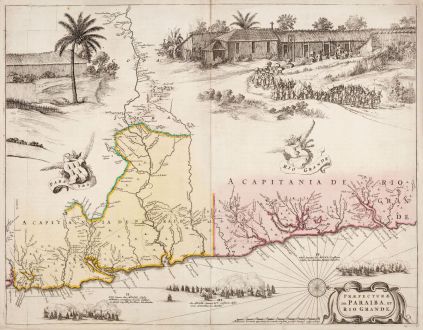 Impressive and coveted map of the coastline in the north-east of Brazil. The map was published for the first time by J. Blaeu in Rerum per octennium in Brasilia by Caspar Barlaeus in 1647 and also serves as the lower right sheet of the 9-sheet wall map Brasilia qua parte paret Belgis. Based on the geographical information of Cornelis Goliath, Elias Herckmanns and Georg Markgraf, who surveyed the northeastern part of Brazil, when it was under Dutch control. The map is among the first based on non Portuguese sources.

Shown are the Brazilian states of Paraiba and Rio Grande do Norte with the Manguaba River. Richly decorated with a procession of the Tupinambá people with a Dutch flag. To the left a sugar mill. Below three sea battles fought in 1640. Oriented with west at the top. From the Latin edition of Atlas Maior, printed 1662 in Amsterdam.