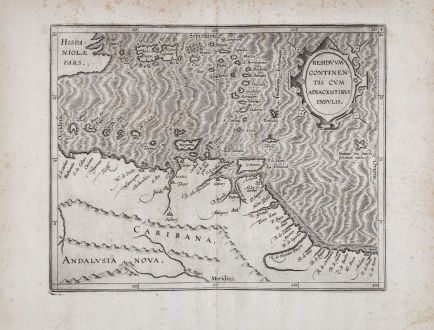 Early and important antique map of Venezuela and the eastern part of the Caribbean by Cornelis van Wytfliet. First published in 1597 in Descriptionis Ptolemaicae Augmentum. Showing the north coast of South America, Venezuela with parts of the Dominican Republic, Puerto Rico and the Lesser Antilles to Trinidad and Tobago. Top right a title cartouche.

In 1597 Cornelis van Wytfliet published his Augmentum to Ptolemy's Geography. This is true in as much as it covers all the Americas, a part of the world unknown to the latter; however, no other connection between them exists. Dedicated to Philip III of Spain it is a history of the New World to date, recording its discovery, natural history etc. For the book Wytfliet had engraved nineteen maps, by whom we do not know, one of the world and eighteen regional maps of the Americas. . . As such this book can be truly called the first atlas of America. It was an immediate success and ran to several editions.

Cornelius van Wytfliet, also known as Cornelis van Wytfliet, was a Flemish cartographer. His Atlas of America with 19 double page engraved maps made him famous today. First published in 1596 in Leuven (Louvain), Flanders in Latin with the title Descriptionis Ptolemaicae Augmentum. The accuracy of some of the maps is still a mystery today. Especially the course of the north coast of North America, the Antarctica and various river courses are reproduced quite accurately, and this before - according to today's knowledge - any European has ever seen these regions. A reprint of the atlas in Dutch followed in 1597, further editions appeared until 1615 in Douai and Arnhem, also in French. A plagiarism with German text first appeared in Cologne in 1604.