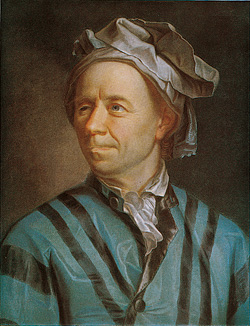 Leonhard Euler was born 1707 in Basel and has been one of the most famous mathematician. From 1720 he studied at the University of Basel by Johann Bernoulli. From 1727 he was Professor for Mathematics and Physics at the University of Saint Petersburg. 1741 he followed a call of Frederick II of Prussia to the Berlin Academy. After 25 years in Berlin he left for Saint Petersburg a second time. He died 1783 in Saint Petersburg.
Accept We use cookies to optimize and continuously improve our website. By continuing to use this website, you agree to the use of cookies. Further information on cookies can be found in our Privacy Statement.