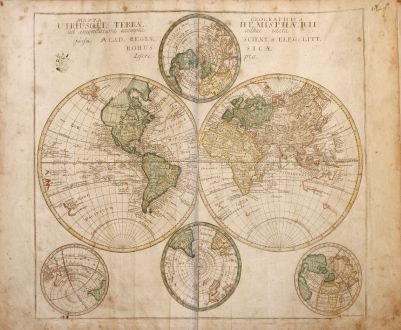 Rare school atlas by the famous mathematican Leonhard Euler. It was the most successful project of the "Royal Academy of Sciences" in Berlin. First edition was published in 1753, titled 'Atlas geographicus omnes orbis terrarum regiones in XLI tabulis' with a preamble of L. Euler. This second edition was published 1760, followed by third unchanged edition in 1777 until 1784.

This Atlas includes 4 maps of the world (one in two sheets), 4 maps of the continents (Africa, Asia, America and Europe), 1 map of America in 4 sheets, 1 map of Europe in 4 sheets, 4 map of Great Britain, one map of Russia, one map of Palestine and 21 map mainly European countries including Scandinavia, Denmark, Greece, Italy, Spain, France, Turkey, Germany, the Lower Countries, Poland and others.

Map 44 (Mare Pacificum) is missing, one extra map of Poland bound. With contemporary owner's names, several manuscript notes in many maps and margin, small stamp of the Academy on each map to show authenticity. Some maps with tears in centrefold, some water stained in margin, browning and staining.