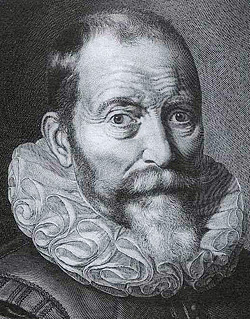 Willem Janszoon Blaeu was born 1571 in Alkmaar. He was trained from 1594 to 1596 by the famous danish astronomer Tycho Brahe. 1599 he went to Amsterdam and founded a business as globe maker. Later he started producing map and sea charts, including his first world map in 1605. In 1633 he was appointed Hydrographer for the Dutch East India Company (VOC). His most famous work was the Theatrum Orbis Terrarum sive Atlas Novus of 1635, which was published until 1655 in total six volumes. After Blaeu's death in 1638 his sons Joan and Cornelis continued the business and finished the Atlas Novus and started an even larger work, the Atlas Maior, which reached 12 volumes. In 1672 a fire destroyed the printing house and most of the printing plates. Joan Blaeu died the following year, leaving the business to his three sons Willem (1635-1701), Pieter (1637-1706) and Joan II (1650-1712). While the business began to decline in the hands of his sons, the dominance of the Blaeu publishing house finally ended in 1703 when the V.O.C. stopped publishing maps bearing the Blaeu family name. Some of the surviving plates were bought by F. de Wit and Schenk & Valk.
Accept We use cookies to optimize and continuously improve our website. By continuing to use this website, you agree to the use of cookies. Further information on cookies can be found in our Privacy Statement.