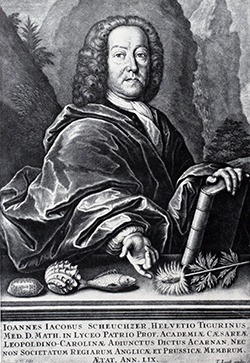 Johann Jakob Scheuchzer was a Swiss physician, naturalist, geographer and is considered one of Switzerland's most important polymaths. He became best known for his interpretation of fossils as remnants of the Great Flood. During his studies of the Alps, Scheuchzer produced a map of Switzerland in 4 sheets in 1713, which is considered the best map of Switzerland of its time.
Accept We use cookies to optimize and continuously improve our website. By continuing to use this website, you agree to the use of cookies. Further information on cookies can be found in our Privacy Statement.