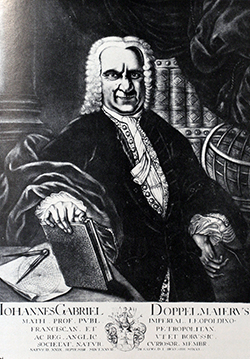 J. G. Doppelmayr was a Germany mathematician, cartographer and astronomer born 1671 in Nuremberg. He became Professor of Mathematics in 1704 until his death in 1750. In 1742 he completed his Atlas Coelestis together with Johann Baptist Homann. He was also member of the Royal Societies in Berlin and St. Petersburg.
Accept We use cookies to optimize and continuously improve our website. By continuing to use this website, you agree to the use of cookies. Further information on cookies can be found in our Privacy Statement.