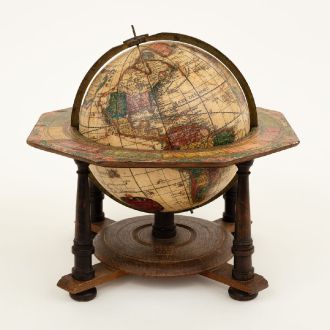 Important and beautiful table globe made by Johann Gabriel Doppelmayr in 1730. Doppelmayr was a astronomer and geographer and also made globes after working with Johann Baptist Homann in Nuremberg in the early 18th century. He taught natural sciences and mathematics in Nuremberg from 1704 until his death and published his first globes with 32 cm diameter in 1728, this terrestrial globe with 20 cm in 1730 and finally 10 cm globes in 1736. The globe segments were engraved by the Nuremberg instrument maker Johann Georg Puschner.

The globe consists of a papier mache/chalk globe with 12 old hand-coloured engraved paper gores by J. G. Puschner in a brass meridian ring with graduation. The globe rests on a contemporary wooden cross frame with four turned ebonized columns and pressed ball feet, round base plate and octagonal wooden equator ring. The latter with pasted old colored copper engraving with division of months and days, the days of the saints and the cardinal points.

The Doppelmayr globes are considered the most accurate of their time (Muris/Saarmann pp. 192). The terrestrial globe shows numerous results of the great voyages of discovery: California is already connected with the American mainland, the west and north coast of Australia is indicated, the Antarctic Terra Australis Incognita is at least present by some islands sighted by Drake. William Dampier's (1683-1691) circumnavigation of the world is marked. Although the findings from Bering's first voyage (1728-1730) were not used, this Doppelmayr globe shows a fictitious Northwest Passage.

Professionally cleaned and revarnished. Below the title cartouche with a small dent. One third of the copperplate equator ring on the wooden frame replaced by manuscript facsimile.

J. G. Doppelmayr was a Germany mathematician, cartographer and astronomer born 1671 in Nuremberg. He became Professor of Mathematics in 1704 until his death in 1750. In 1742 he completed his Atlas Coelestis together with Johann Baptist Homann. He was also member of the Royal Societies in Berlin and St. Petersburg.