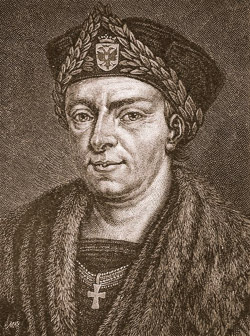 Konrad Celtis, also Conrad Celtis, born as Conrad Bickel 1459 in Wipfeld, Franconia. He was a humanistic scholar and poet of the Renaissance. He studied in Cologne, Heidelberg, Padua, Ferrara, Bologna, Florence, Venice and Rome.

Celtis was not only important as a poet, but also as a geographer and editor. He discovered the 12th century medieval copy of a late Roman road map and handed it over to his friend Konrad Peutinger around 1507. Today this copy of the ancient Roman road map is known as Tabula Peutingeriana or Peutinger's Tabula. After Peutinger's death a copy was made by a member of the family, which was published by Abraham Ortelius in 1598.

His main work is considered to be the Quattuor libri amorum, which was first published in Nuremberg in 1502. Each of the four books opens with a map drawn by Celtis himself. The woodcuts of the maps were made in the circle of Albrecht Dürer and were cut by Dürer's assistant Hans Süß von Kulmbach (Hans Suess).

Celtis died 1508 in Vienna and was buried in St. Stephen's Cathedral.