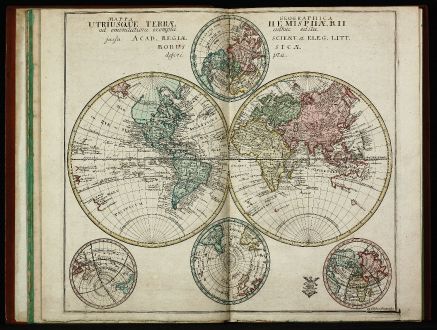 First edition of the rare Atlas by the famous mathematician Leonhard Euler. The second edition was published in 1760 with 44 maps, followed by the third unaltered edition in 1777, which was printed until 1784.

The Atlas was published on behalf of the Royal Prussian Academy of Sciences in Berlin by Leonhard Euler, designed specifically for the use in classrooms. The maps, mostly based on works of Johann Christoph Rhode were mostly engraved by Nicolaus Friedrich Sauerbrey.

The present edition includes a title page, a 10-page preface by Leonhard Euler in Latin and French, 41 double-page engraved maps as mentioned in the title and preface, plus 4 additional maps. Each map is old coloured by a contemporary hand and has a stamp of the Academy of Sciences. The following maps are included:

All maps of this atlas are shown on my new Atlas Gallery website: Euler Atlas