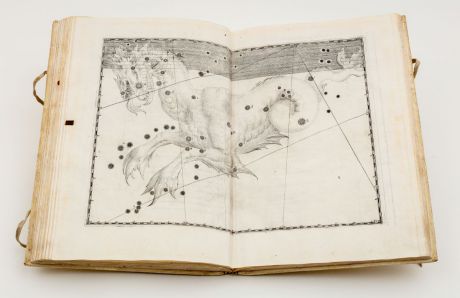 This work was to uranography what the Gutenberg Bible was to printing.
--George Lovi, Hungarian-American astronomical cartographer.

Bayer's Uranometria is perhaps the most illustrious of all celestial atlases. It set the standard for scientific accuracy and artistic elegance in celestial cartography that has endured to the present time. It contains 51 star charts, one for each of the traditional 48 Ptolemaic constellations, plus one chart of the newly discovered southern skies, and two planispheres. This is the first edition published 1603 by Christoph Mang in Augsburg. The magnificent star maps were engraved by the renowned Augsburg engraver Alexander Mair.

The title Uranometria means "celestial survey" and refers to the Greek word Uranos as a designation for the sky or to Urania, the muse of astronomy in Greek mythology. The star atlas contains 51 star maps, one for each of the 48 classical Greek constellations, a map of the newly discovered deep southern sky, which is considered to be the first accurate map of this region, and two celestial planispheres of the northern and southern skies.

In addition to his own observations, the celestial globes of Hondius and Ptolemy's Almagest, Bayer used data from the Danish astronomer Tycho Brahe for the exact position of the stars in the northern night sky. Brahe's records did not go to print until 1602, but Bayer apparently owned one of the handwritten copies that had circulated before. For the positions of the stars of the southern night sky, Bayer used the Spanish cartographer Pedro de Medina and the Dutch navigator Pieter Dirkszoon Keyser, who was commissioned by Petrus Plancius at the end of the 16th century to make observations of the deep southern sky.

The Uranometria is concerned solely with the description of the heavens. Bayer does not get involved in the dispute among the astronomers of his time as to whether the Earth or the Sun is the centre of the celestial motions. Here, for the first time, an astronomer combined the exact position of the stars and the artistic representation of the constellations. Only the visible stars are depicted; the telescope was not invented until 1608. Bayer was also the first to designate the stars of a constellation according to their degree of brightness using small Greek letters. Science has preserved this custom to this day. For example, Polaris, the brightest star of the constellation Ursa Minor, is scientifically referred to as α Ursae Minoris (Alpha Ursae Minoris) or α UMi for short.

First an engraved architectural title page with Atlas and Hercules, above Apollo, Cybele with two lions and Diana on the right, below the city view of Augsburg. Signed A.M. (for Alexander Mair) and dated MDCIII. Followed by 3 leaves preliminary text. A total of 51 double-sheet engraved star maps, 21 of which are maps of the classical constellations north of the zodiac, the 12 constellations of the zodiac itself, followed by 15 classical constellations south of the ecliptic. A general map with the 12 newly discovered constellations of the deep southern sky, which still bear the names introduced by Bayer. The final two maps were celestial planispheres depicting the entire northern and southern sky. Each plate has a carefully engraved grid, on verso of each map a Latin table with the name and description of each star of the corresponding constellation. Finally, a woodcut printer's device in the form of a pine-tree dated M. DCIII.

Pigskin binding of the time with rich blind embossing, handwritten spine label, closing bands and supralibros on both covers. Slightly rubbed and spotted.

Johann Bayer (also Johannes Bayer) was a German lawyer and astronomer. He studied philosophy and law in Ingolstadt and settled as a lawyer in Augsburg. He had other interests as well, including mathematics and archeology. For example, he took part in excavations in Rome and made drawings of the finds. But his passion and later claim to fame was astronomy. Today, Bayer is known for his important celestial atlas, the Uranometria, published in Augsburg for the first time in 1603. His star atlas was the first to depict the entire celestial sphere. He added new constellations to those of classical antiquity, which are still in use today. His systematic designation of the stars, introduced in the Uranometria, with a Greek letter followed by the Latin name of the constellation, is still used in astronomy today and is named after him as the Bayer designation. Also an impact crater on the moon was named after him.