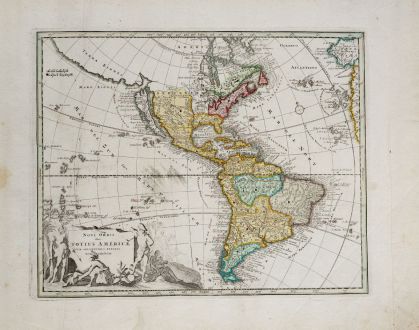 Scarce and interesting map of America by Christoph Weigel. California is still represented as a big island. The Mississippi river flows into the Gulf of Mexico. In the northern Pacific a legend Gold-Catholic / Erdfarb-Heydnisch (Gold: Catholic / Earth-brown: Heathen). The parts of the country are marked according to this legend with gold or a brown dot equivalent to Catholic or heathen (Protestant) affiliation. Decorated with a beautiful title cartouche to the lower left. From Bequemer Schul- und Reisen-Atlas also titled Atlas scholasticus et itinerarius by Christoph Weigel. Weigel's well-known travel atlas, which he published in collaboration with Professor Johann David Köhler.