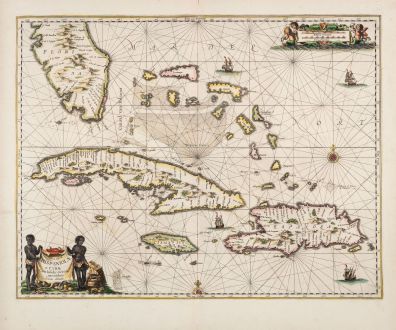 Rare and very decorative, old coloured sea chart of Southern Florida and the Western Caribbean by J. Janssonius. Shows the southern tip of Florida, the Bahamas and the Greater Antilles with Cuba, Hispaniola (Haiti and the Dominican Republic) and Jamaica. Decorated with rhumb lines, two compass roses, sailing ships, a title cartouche and a mileage scale.

For this atlas three new charts relating to North America were produced. This one, produced in a larger scale than usual, reflected the importance of its waters to Spain. It was through the Canaal van Bahama that a large portion of the gold and silver from the americas passed. Cartographically the map is drawn from the extremely rare Hessel Gerritsz chart of c. 1631. The nomenclature of the Florida peninsula matches, with the exception of five names at the southern tip. The most interesting feature is the reintroduction of a mountain range; this had not been seen on a map of the region since those of de Bry in the 1590s. After a brief period where the name Tegesta was applied, FLORIDA is used again.