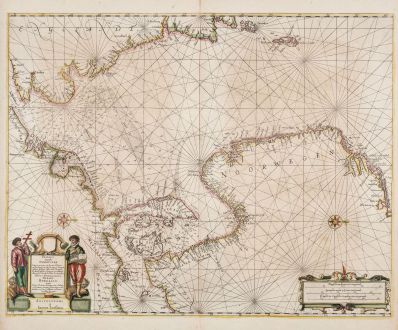 Rare and very decorative, old coloured sea chart of the North Sea by J. Janssonius. Shows the North Sea coast with the Shetland and Orkney Islands, the Scottish and English east coast, Calais and Dover, the North Sea coast of the Netherlands and Germany, the coastline of the Baltic Sea in the east to Szczecin and in the north the south coast of Sweden. With Denmark and the Atlantic coast of Norway to Trondheim. North is oriented to the right. Decorated with rhumb lines, two compass roses and a cartouche with mileage scale. The title cartouche is flanked by two navigators with a Jacob's staff and an atlas with nautical charts.

Small tears in the centrefold within the wide margin. Very good conditions with beautiful old colours.