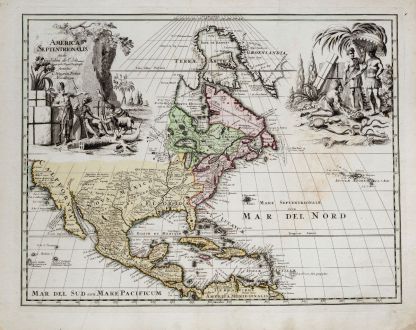 Scarce and interesting map of North America from Christoph Weigel after G. de l'Iisle. California is represented as a peninsula, with Mendocin as the most northern point of the west coast. The interior is filled with the names of various Indian nations. Decorated with two beautiful cartouches. From Bequemer Schul- und Reisen-Atlas also titled Atlas scholasticus et itinerarius by Christoph Weigel. Weigel's well-known travel atlas, which he published in collaboration with Professor Johann David Köhler.

Slightly spotted in the Atlantic ocean. A tear in the upper right magin just into the image backed.