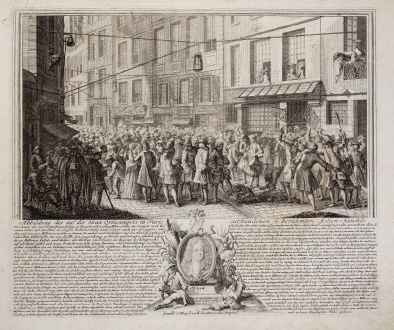 Engraving of one of the most infamous financial breakdowns in history, known as the Mississippi bubble. Shows the chaotic situation during the wind trade on Rue Quinquempoix in Paris. From Bequemer Schul- und Reisen-Atlas also titled Atlas scholasticus et itinerarius by Christoph Weigel. Published around 1720 in Nuremberg. Weigel's well-known travel atlas, which he published in collaboration with Professor Johann David Köhler.