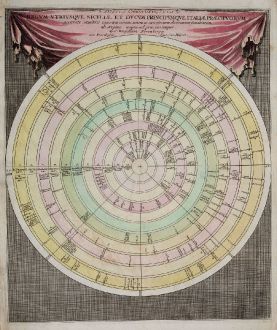 Rare and attractive timewheel of the reigns of the kings and dukes in Italy as a circular diagram. Each circle corresponds to a jurisdictions. From 1000 to 1800, no printed entries after 1718. Continued by an old hand with ink until 1737. Old coloured copper engraving from Bequemer Schul- und Reisen-Atlas also titled Atlas scholasticus et itinerarius by Christoph Weigel. First published in Nuremberg in 1718. Weigel's well-known travel atlas, which he published in collaboration with Professor Johann David Köhler.