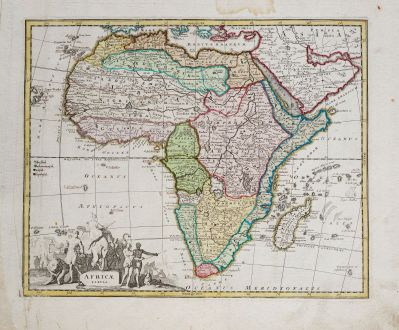 Antique map of Africa by Christoph Weigel. Parts of the geographic information are already shown accurately, others are still based on the Ptolemaic maps, such as the source of the Nile in the Lakes Zaire and Zaflan. From Bequemer Schul- und Reisen-Atlas also titled Atlas scholasticus et itinerarius by Christoph Weigel. Weigel's well-known travel atlas, which he published in collaboration with Professor Johann David Köhler.