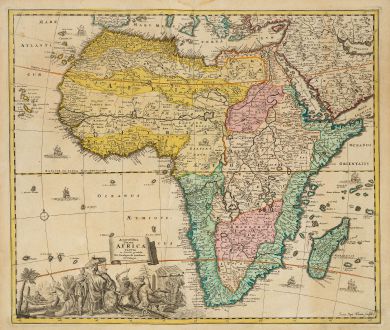 One of the first maps by Johann Baptist Homann

This rare map of Africa by Jacob von Sandrart is one of only two maps that Johann Baptist Homann engraved before 1700. Parts of the geographical information correspond to the time and is already shown correctly, others are still based on Ptolemaic maps, like the origin of the Nile in the inland lakes Zaire and Zaflan. The map is difficult to date because it was not bound into any of the standard atlases and was usually sold separately or can be found in composite atlases. Richard Betz dates the map in The mapping of Africa to around 1697, when Sandrart published much of his work. Beautifule title cartouche with the inhabitants and animals of Africa, sailing ships in the seas.