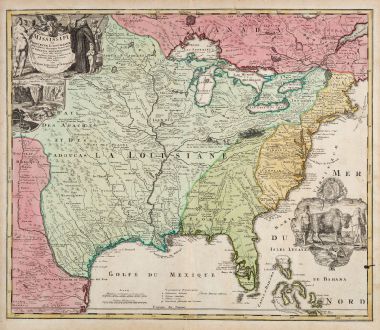 The famous Buffalo Map of the Southeast by J.B. Homann. Showing the most part of today United States from the Great Lakes to Florida, the Mississippi River Valley with Louisiana and Texas, as well as New Mexico in the west.

The map is based on the de l'Isle map of 1718. Homann dedicated it to the Franciscan Father Antoine Hennepin who explored the Mississippi and Great Lakes regions and the Niagara Falls. The magnificent title cartouche is showing the Franciscan, with a view of the Niagara falls below. The cartouche right to Florida showing American Indians with a buffalo and a pelican.

The original coloring was done in Homann's publishing company and indicates the political situation in the early 1700's. The English Colonies are colored yellow, New Mexico and Canada in red, the Mississippi River Valley with Louisiana up to the Great Lakes in turquois and Florida is covered with green. 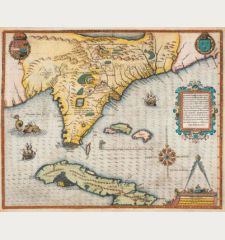