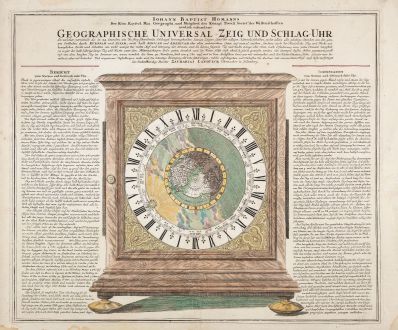 Curious Depiction of California as an Island.

Illustration of a geographical clock by Zacharias Landteck, who manufactured it in the early 1700's in Nuremberg. The engraving was created by J. B. Homann and shows the clock with a detailed description of the function. The curious clock enables the mid-day sun height, the day length and the sunrise and sunset on the northern hemisphere.

The globe in the centre is surrounded by clouds within a ring of Zodiac signs. The hemisphere is centred at the North Pole, California is still depicted as an island.

Fortunately, the original clock is preserved and located in the Swiss clock museum of La Chaux-de-Fonds close to Bern.

Slightly wrinkled at centerfold, some water staining in margin, a tear on the right and two small tears in centerfold backed, in upper margin a small repair. Beautiful original old colours.