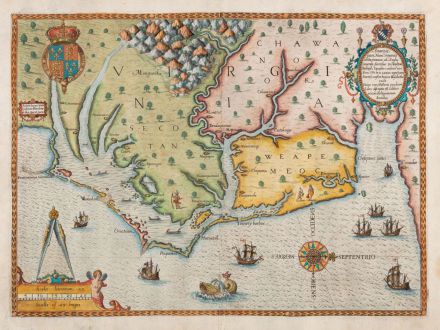 One of the Most Significant Cartographical Milestones on Colonial North American History.

A very fine dark impression of the first printed map of Virginia and the Carolinas. From the first German edition of Theodor de Bry's Grand Voyages printed 1590 in Frankfurt. With unusual wide original margin.

Philip D. Burden in The Mapping of North America about this map (#76):

Theodor de Bry's map of Virginia, after John White, is one of the most significant cartographical milestones on colonial North American history. It was the most accurate map drawn in the sixteenth century of any part of that continent. It became the prototype of the area until long after James Moxon's map in 1671. Most notably those of de Jode 1593, Wytfliet 1597 and Metellus 1598. This is the first map to focus on Virginia (now largely North Carolina), and records the first English attempts at colonisation in the New World.

The map shows the area from Chesapeake Bay to Cape Lookout. It exhibits greater knowledge than on any surviving manuscript. With the first printing use of the name Chesapeake (Chesepiooc Sinus) and the second of Roanoke. The map shows the position of Indian villages, English ships are shown at sea, while Indian canoes traversing the inland waters.

This map comes from the first part of the first German edition of de Bry's Grand Voyages, titled Wunderbarliche, doch warhafftige Erklärung, von der Gelegenheit und Sitten der Wilden in Virginia .... This first edition was printed 1590 in Frankfurt. A second and a third German edition was published in 1600 and 1620. The Latin edition of de Bry's Grand Voyages with the title Admiranda narratio fida tamen, de commodis et incolarum ritibus Virginiae was published together with the German first edition in 1590.

Lower centerfold and a small tear in lower margin backed. Some minor soiling in the right margin and a small brown spot right to the upper right cartouche. A very fine dark impression with wide original margin. A very good example with beautiful colors. Never framed before.