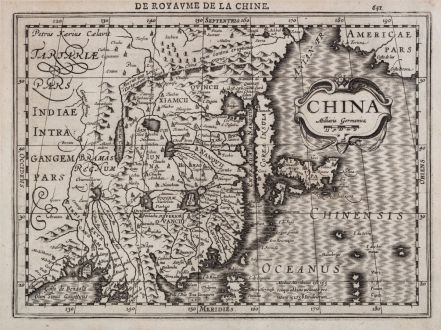 Rare antique map of China by G. Mercator. Shows China with the Great Wall of China, Japan, Korea is still shown as an island and in the northeast with Alaska. From the scarce edition of the Mercator Atlas by J. Cloppenburch (also Cloppenburgh), printed in Amsterdam between 1630 and 1636. Its newly engraved maps were of a size (c. 19 x 25 cm) that fell in between the folio maps in the Mercator-Hondius Atlas (c. 35 x 50 cm) and the Atlas Minor (c. 15 x 20 cm). Engraved by the Dutch master engraver Pieter van den Keere (Petrus Kaerius). French text on verso.