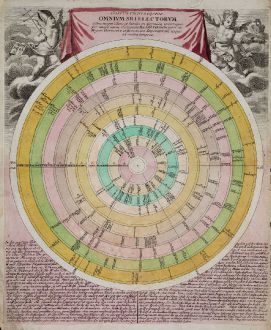 Timeline of rulers within the German Empire as a circular diagram. Each circle corresponds to an electorate. From 1200 to 1800, no printed entries after 1716. Continued by an old hand with ink until 1745. Old coloured copper engraving from Bequemer Schul- und Reisen-Atlas also titled Atlas scholasticus et itinerarius by Christoph Weigel. First published in Nuremberg in 1718. Weigel's well-known travel atlas, which he published in collaboration with Professor Johann David Köhler.