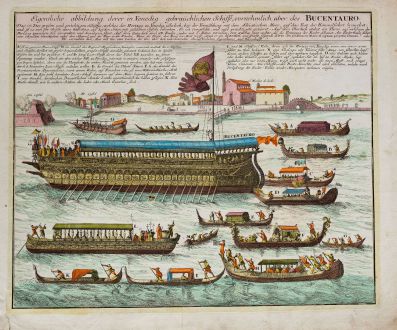 Beautiful old coloured engraving of the Bucintoro (Bucentaur), the state barge of the Doge of Venice. The magnificent Venetian galley was equipped with 168 oars with 42 straps. The Bucintoro was used in the lagoon on the Ascension Day during the Festa della Sensa, the spiritual marriage of Venice to the sea. The last Bucintoro was extensively destroyed by Napoleon's soldiers.