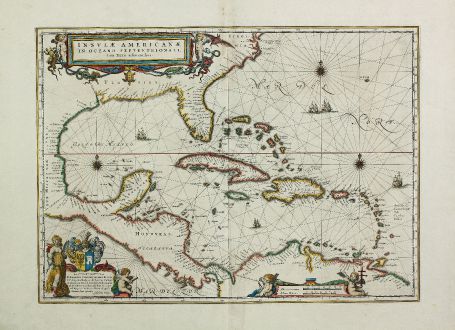 Hand-coloured engraved sea chart of the West Indies by W. Blaeu. With the East Coast of the Americas from Chesapeake Bay to the Orinoco. First published in Theatrum Orbis Terrarum during the year 1635, this example comes from the 1662 Latin edition of the Atlas Maior. The copper plate of the map was unaltered on the different editions, only text on verso has changed. Decorated with a title cartouche with reptiles and putti, dedication and scale cartouches, galleons, rhumb lines and compass roses.

P. D. Burden about this map:

Cartographically the map draws on the extremely rare chart by Hessel Gerritsz, c.1631. The area of coverage is exactly the same with the exception of Blaeu's addition of the west coast of Central America. The nomenclature of the North American part is virtually identical, the only notable addition being the naming of VIRGINIA. It reflects the firsthand knowledge of Gerritsz during his voyage to South America and the West Indies undertaken in 1628. The distance between Chesapeake Bay and Albemarle Sound is accurately portrayed at 1°; even in Gerritsz's acclaimed NOVA ANGLIA ..., for de Laet, 1630, this distance is over 2°. It seems likely that a Spanish chart was used as the nomenclature along the south-east coast lacks any of the French influences often seen at the time.

Printers crease from centre of the map to lower margin right to the centrefold. Full original margin. Very good condition.