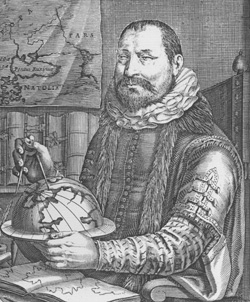 Jodocus Hondius born 1563 in Wakken (West Flanders). He became a globe maker and map engraver. In 1593 set up his business in Amsterdam after he spent some years in London. He was one of the most important engravers of his time and engraved maps for van den Keere, Waghenaer or Speed. Hondius bought the plates of Mercator in 1604, added around 40 maps and published the Atlas first 1606 still under Mercators name. After his death 1612 in Amsterdam, the business was carried out by his sons Jodocus II and Henricus.
Accept We use cookies to optimize and continuously improve our website. By continuing to use this website, you agree to the use of cookies. Further information on cookies can be found in our Privacy Statement.