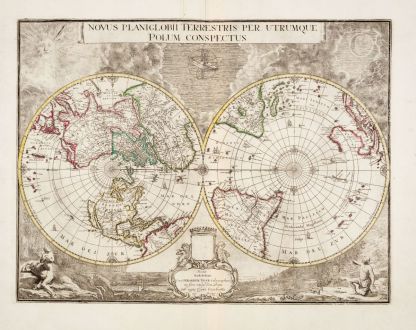 The Most Interesting World Map of its Period.

The mysterious final Blaeu world map in polar projection. Engraved by Joan Blaeu in 1672, but never published by himself because of the great fire at Blaeu's publishing house. The copper plate came into the possession of Gerald Valk, who occasionally used it in his atlas from 1695 onwards.

R. Shirley describes this Blaeu/Valck world map in The Mapping of the World, No. 459 :

Underneath Valck's imprint the erased signature of J. Blaeu can just be discerned, indicating that this plate was prepared in the last years of Joan Blaeu's life, in 1672-73. The projection used - two north and south polar views, each extending to the equator - is not a common one and it has been suggested that Blaeu intended this special map for the Spanish edition of the Atlas Maior which was never completed. No revisions to the map itself appear to have been made by Valck and the armorial shield map above the imprint cartouche remains blank. The title is at the top in a banner, against a backdrop of clouds, stars and the sun and the moon. At the bottom are two scenes: on the right Adam is happily seated in the Garden of Eden, and on the left a dismal post-lapserian Adam and Eve are in a wetter and rougher land. The map plate probably came into Valck's hands after an auction sale in 1694 by Wolfgang, the first purchaser of some of Blaeu's plates. The suggested re-issue date of c. 1695 anticipates the map's inclusion in the Schenk and Valck atlases of the early 1700s.

For the periode, the double polar projection is unusual and reminds of Fine and De Jode's maps. The polar projection highlights North America and Australia. The Great Lakes in the north of America are still inaccurately drawn, California is shown as an island with a flat northern coastline. Australia has a developed west coast, but the east coast is not drawn.

As one of the last cartographic productions of the great Blaeu publishing house, this is one of the most interesting world maps of the time and comparable to their first atlas world map in Mercator projection.