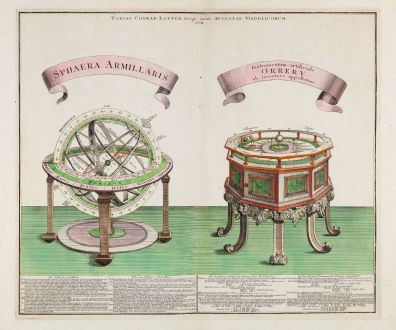 Rare and very decorative engraving with two astronomical devices: On the left an armillary sphere to show the movement of the heavenly bodies, on the right a planetarium, as it was constructed in 1712 by the London instrument maker John Rowley for Charles Boyle, the 4th Earl of Orrery, and also bears his name. The planetary machine illustrates the orbit of the planets around the sun. Below a bilingual description of the two devices in Latin and German.

Tobias Lotter was born 1717 in Germany. He became a publisher and engraver in Augsburg. He was engaged by Matthäus Seutter the elder as an engraver and married his daughter. He also was successful with his own business and became one of the better known German cartographers. After his death in 1777, the business was continued by his son Matthias Albrecht Lotter.