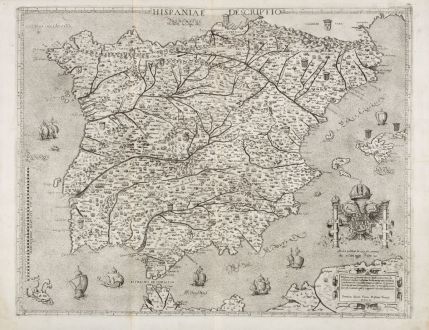 The Rare and Important Zenoi Map of the Iberian Peninsula 1560.

A very fine, rare and important map of Spain and Portugal by Domenico Zenoi (Zenoni). Richly decorated and engraved in 1560. In very fine condition and printed on two joined sheets. An outstanding example of the heights the engraver's art reached in 16th century Venice.

At the top centre the title Hispaniae descriptio, in the lower right corner a title cartouche Hispania, que & Iberia ... Dominicus Zenoi Venetus Restituit Venetijs MDLX, above the Pillars of Hercules with the coat of arms of the Spanish monarchy. The orientation is indicated in the sea with the names of the winds: Tramontana, Mediodia, Levante and Poniente. Decorated with numerous small territorial coats of arms, eight beautifully realized sailing ships and three sea monsters. Cities and mountain regions are shown pictorially. Printed on two joined sheets, the right half with a watermark Pilgrim, vertical staff, in circle (Woodward 3 or 4: diameter circa 52/53 mm).

The cartographical source of this Zenoi map is the map of Vicko Paletin (Vincentius Corsulensis), a woodcut wall map printed in 1551 on 6 sheets in Venice, of which only one example survived (in the Doria Atlas). The Corsulensis map was copied by Hieronymous Cock and published on 4 sheets in Antwerp in 1553. The only surviving examples of Cock's map of Spain are preserved in the Herzogin Anna Amalia Library in Weimar, and the another one in the National Library of Spain. Cock's map was copied by the Roman engraver Vincenzo Luchini and first published in 1559. Domenico Zenoi copied the Luchini map a year later and published it in Venice in 1560. The Zenoi map is clearer and bolder engraved than Luchini's map, and the text is more legible throughout. Only one state of Zenoi's printing plate exists.

Italian Atlases of the 16th Century

At the end of the 1560s, it became common practice in Venice and Rome to assemble separately published maps and town views to collections to the particular desires of a customer and bind the maps into composite works. Paper strips were attached to small-format sheets and large-format sheets were folded in the middle. Series from town books or from the so-called Isolorios could be bound together. These first collections of loose maps and plans preceded the first atlas conceived as a whole, which Abraham Ortelius published in Antwerp in 1570 with the title Theatrum Orbis Terrarum. Ortelius used many Italian maps as prototype.

The maps, which were usually sold separately, were individually assembled according to the customer's wishes, which is why such an early Italian atlas is also called IATO-Atlas (Italian-Assembled-To-Order). No two of these atlases are alike in number of maps nor in content. Venetian and Roman map dealers and publishers borrowed printing plates from each other, sometimes used them unchanged, or changed the publisher's address and the date in the cartouche. For this reason, atlases with a mixture of Venetian and Roman maps can be found. These rare atlases are also known as Lafreri atlases or for the map itself the term Lafreri-School is commonly used. They are named after Antonio Lafreri (1522-1577), an important engraver, publisher and map dealer in Rome, who for the first time had maps bound together that had been brought to a uniform format. The most important cartographers, engravers and publishers whose maps can be found in these IATO atlases were Lafreri, his nephew Duchetti, Gastaldi, Camochio, Zenoi, Salamanca, Forlani, Tramezini, Ligorio, Bertelli and Zaltieri. There are still about 70 such atlases known worldwide, most of which are in state institutions and libraries. The last Lafreri Atlas on auction we are aware of, was a composite atlas with 46 maps and sold at Sotheby's London in 2014 for 314.500 GBP.

The rarity and elegance of 16th century Italian maps make them the most sought-after cartographic objects today. The maps, which were usually published separately, have mostly been lost over the centuries. Only when the maps were bound into an atlas they had a chance to survive. This is also the case with this map of Spain by Zenoi shown here, which was probably taken from a Lafreri atlas in the 20th century. A number "27" in brown ink by an old hand is still on the top right on verso, which indicates, the maps were numbered consecutively in an atlas. There is also a guard on the back at the centrefold whereby is was bound into an atlas.

Domenico Zenoi (also Zenoni) was an Italian engraver, publisher and goldsmith, active in Venice and Padua in the mid 1500's. His engraved maps date between 1559 and 1574. At least 15 maps signed with his name are known, some of his plates were used later by Camocio, Zaltieri, Huchin and the Bertellis. 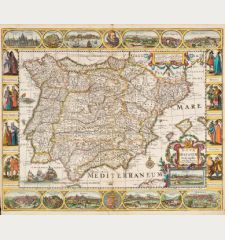 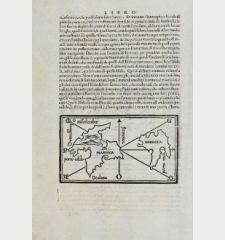 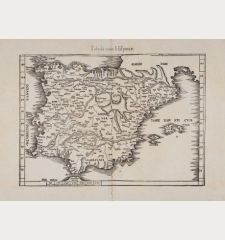 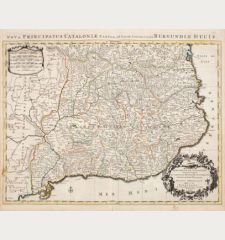 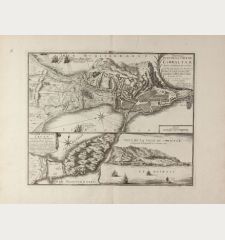 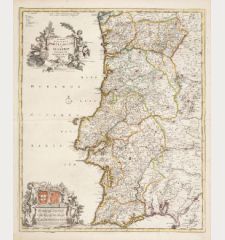 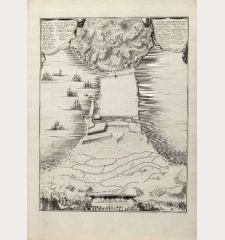 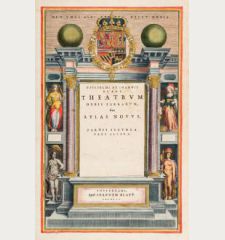 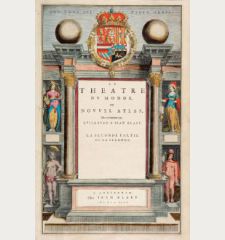 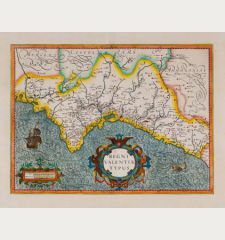 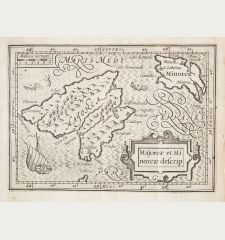 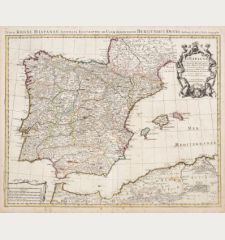 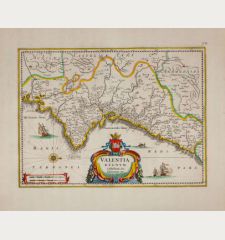 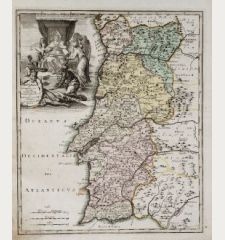 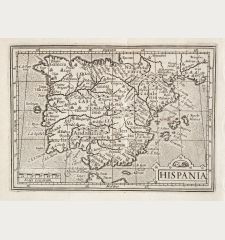 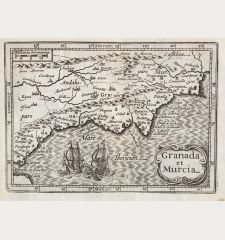 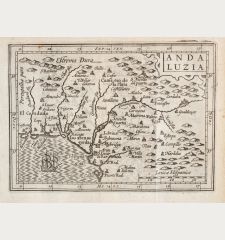 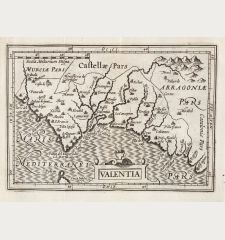