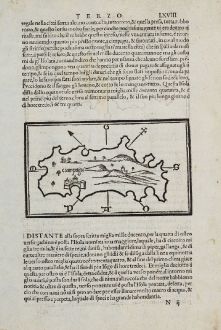 The earliest Europe-printed map of Japan as an island

Early and very important map of Japan by Benedetto Bordone. On verso a map of the Southeast Asia islands Java or Borneo (Java Majjiore), sondur and condur (Pula Condore).

The corresponding text is translated by De Castro, pp. 62-63, as follow:

This island of Zipangu is situated in the East. Its people are fond of idols. The king is accountable to no one. The island has a lot of gold, precious stones and pearls. So wrote the Venetian Marco Polo in his third book.

The map shows an oval island with a large city at a bay and a castle in the mountains. The location of the city roughly corresponds to Kyoto, Kobe or Osaka on the main island of Honshu. Since the map is based on the writings of Marco Polo, any approximation to reality is probably only due to chance. The existence of Japan was doubted by many cartographers until Japan was rediscovered by Portuguese sailors in 1543.

On verso an also very important map of three East India islands. This map also goes back to Marco Polo's records. Although the main island is labeled as Java (Iaua Maggiore), it is probably Borneo because of the location marked on Bordone's world map. The two islands Sondur and Condur described by Marco Polo as being uninhabited, corresponds to Pula Condore.