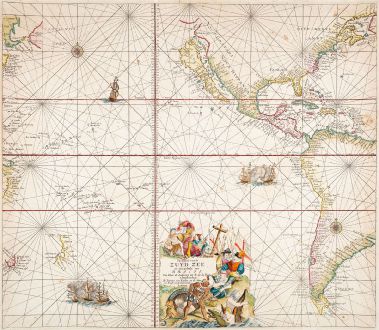 Dramatic Sea Chart of the Pacific with California Depicted as an Island.

Johannes van Keulen's very decorative chart of the Pacific Ocean. Shows the Pacific Ocean with North and South America. California is shown as an island. In the Western Pacific the discoveries of Abel Tasman with parts of New Zealand and Tasmania. In the upper left corner north of Japan, the fictitious coastlines of Eso and Compagnies Land. Below in great detail, the Ilhas de Ladrones (Islands of Thieves) and numerous islands in Micronesia discovered by the Dutch in search of westerlies. This is the first state, published in Amsterdam in 1680.

P. D. Burden about van Keulen's map of the Pacific in The Mapping of North America, No. 518:

Unlike its forerunner, Joannes Janssonius' MAR DEL ZUR, 1650, the cartouche has been relocated to the bottom of the map to enable van Keulen to illustrate virtually the entire east coast of the North America. NIEU NEDERLANDT is still written large, holding on the idea of a Dutch presence in North America which had ended in 1674, although recognition of the English possession is, in fact, given as Nieuw Yorck is identified without mention of the Dutch name New Amsterdam. Verginia is given greater prominence. California is altered to reflect the more recent belief of a double bay northern coastline first depicted by Luke Foxe in 1635. Here van Keulen draws upon the Pieter Goos form of 1663 with a mainland peninsula labelled Agubela de Cato, and a Straet Anian immediately to the north of it.

The extent of the map into Asia is not as far as the Janssonius, although in this region it draws upon the cartography of the Pieter Goos version, 1663. It records the discovery by Abel Tasman of New Zealand and Tasmania. The Gulf of Carpentaria, Australia, is featured as is the mistaken COMPAGNIES LAND which was, in fact, one of the Kurile Islands.

Small tears backed at the top and bottom of the centrefold and in the upper white margin. Very good condition.

Johannes van Keulen, born in 1654, was a bookseller in Amsterdam and funded a publishing company in 1678. The family owned company was successful until middle of 19th century, also the sons and grandsons of Johannes had large contribution. The two major atlases have been the Zee Atlas first published 1680 and the Zee-Fakkel first printed 1681 with editions up to 1803. He died in 1711. 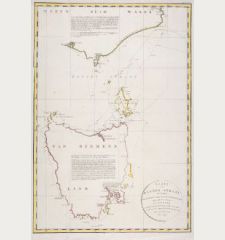