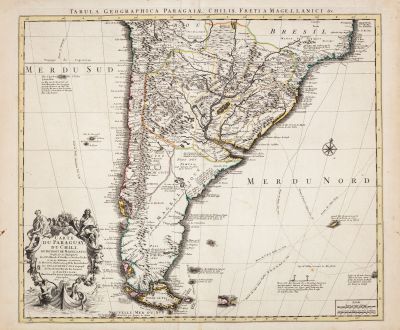 Old coloured map of the southern part of South America after Guillaume de l'Isle. This is the Covens & Mortier version of the G. de l'Isle map. Shows Argentina, Chile, Paraguay, Uruguay, southern Brazil, Patagonia and the Strait of Magellan. The routes of the 16th and 17th century explorers and navigators in the Atlantic and Pacific are marked. A magnificent title cartouche to the lower left.

Creased to the left of the centrefold. Good conditions with old colours. Never framed before.