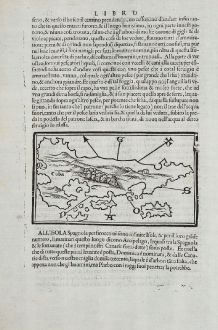 Thomas Suarez notes about the map of Cuba:

Bordone follows closely the model for Cuba established by Waldseemuller on his large world map of 1507 and the Terre Nove from his atlas of 1513. There is a primitive representation of Batabano and Guacanayabo Gulfs. The fat western end of the island probably results from the fact Waldseemuller's model may have originated in a configuration which connected Cuba to the (Asian) mainland. For as crude as this delineation is, it is more remarkable at this early date that it is not altogether arbitrary.