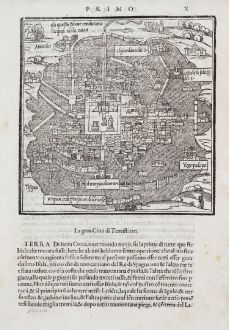 Rare and important plan of Mexico City by Benedetto Bordone. Shows Tenochtitlan, the capital of the Aztec Empire, which was destroyed by the Spanish conquistadors. The remains of Tenochtitlan are almost completely overbuilt by today's Mexico City. Some ruins of Tenochtitlan can be seen in the historic center of the Mexican capital.

The plan was first published in 1524 and goes back to records of Hernán Cortés. The Cortés Plan of Mexico City is one of the first plans of a city in America. Only the plan of Santo Domingo in the first Epistle of Columbus was drawn before.