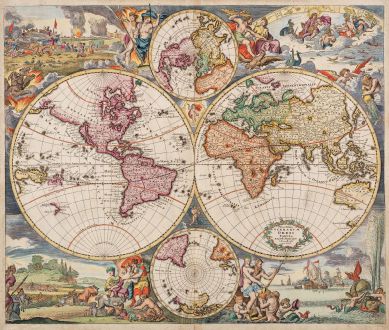 Very decorative double-hemisphere world map by Justus Danckerts. Based on Frederick De Wit's maritime world map of 1668. With two hemispheres and two small inset polar maps. Decorated with large and lively scenes allegorically representing the four elements fire, earth, water and air. Fire is shown by war and destruction; air by the heavens; earth by harvesting and husbandry; and water by ships and a spouting whale.

Justus Danckerts produced two world maps based on the maritime world map of Frederick de Wit (Shirley 444). For the first edition of 1680 (Shirley 495), Danckerts adapted both the geography and the decorative elements from De Wit almost unchanged. For this second world map of 1685 (Shirley 529), the title cartouche already contains the privilege granted to him in 1684. The outer decoration is once again very similar to that sourrounding De Wit's maritime world map, but the geography has numerous changes and additions.

The discoveries around Australia made by Tasman on his first and second expedition in 1642-44 are included again. New Zealand is once again drawn only by one coastline, New Guinea is now drawn as a large island and Danckerts has added the names of the oceans. California is still shown as an island, the west coast of North America beyond California has been added now. The lower polar map was completely revised. Now showing all the southern continents as far as the equator whereas previously only the southernmost tip of South America was depicted.

The Danckerts family sold and published maps during the 17th Century in Amsterdam. Justus Danckerts, the son of the business founder Cornelius Danckerts, was born 1635. He has published several Atlases together with his son Theodorus between 1680 and 1700. The plates finally have been sold to R. & J. Ottens how published them on their own name. He died in 1701. 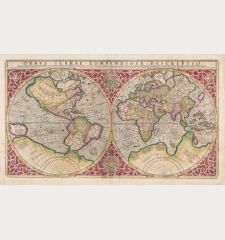 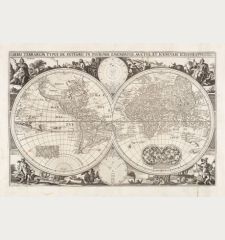