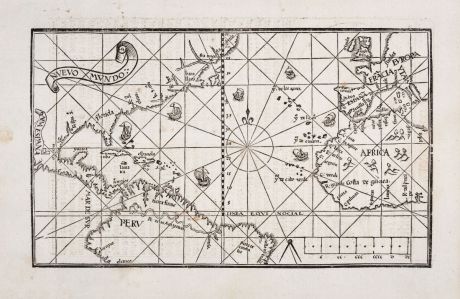 Real First Edition of Medina's Very Rare Map of America and the Atlantic.

Very rare and important first edition of the map of America and the Atlantic from Pedro de Medina's Arte de Navegar. Printed in 1545 by Francisco Frenandez de Cordova in Valladolid, Spain. Shows the Atlantic Ocean with the coastal areas between Europe, East Africa and America. With two title bands Nuevo Mundo and Nueva Espana, sailing ships, a compass rose with rhumb lines and a mileage scale.

This example comes from the first edition of Medina's art of navigation of 1545, printed from one woodblock with text in 2 columns, initial and diagram on verso "Libro Tercero. Capit. vii. Del con cierto y orden delas cartas de marear", but without any foliation as mentioned by Burden for the use in altogether 3 editions. The foliation XXII mentioned by Burden for the first state can be found in the later 1551 and 1556 edition only. The history of this woodblock is rather complicated: it was already cut in 2 halves for the first edition of Medina's Libro de grandezas in 1548, and re-published in all editions up to 1568, partly with the addition of the southern part of South America, which is lacking in this first appearance.

His [Medina] knowledge of the New World was first hand, having travelled with Cortés. Later he held the position of debriefing the returning crews from their voyages. The map depicts the trade routes to and from Spain and her possessions by the use of ships heading south-westerly on the outward bound journey and returning via the Gulf Stream to the north-east. The Papal demarcation line dividing the Americas between Portugal (the land to its east) and Spain (to its west) runs vividly through the map, illustrating for the first time the future influence that the former was to have over the country we know of as Brazil. Central America and particularly the Isthmus of Panama are shown remarkably accurately, and the Yucatan is shown correctly as a peninsula. R. Spu. S. [Rio Spiritu Santo in Texas] is depicted following Hernando de Soto's epic voyage of exploration through the south, 1539-43.

Medina's Arte de Navegar is considered the most influential work on navigation in the 16th century. It appeared in translations in German, Italian, English and French. Even Francis Drake accompanied a copy on his voyages (the French edition of 1554). The original Spanish edition of 1545, from which this map comes from, is considered to be the rarest. Only two copies are listed in the ABPC (American Book Prices Current) within the last 40 years. The last copy was sold at Christie's in New York in 2008 for more than USD 500,000: https://www.christies.com/en/lot/lot-5084279

Pedro de Medina was born in Seville in 1493. He was a Spanish cartographer, geographer, astronomer and author of important works on navigation. He served as a librarian for the Duke of Medina-Sidonia and compiled maps and devices for navigation on behalf of Emperor Charles V (Carlos I). 1549 he was appointed Cosmografo de Honor.

His famous major work Arte de navegar (The Art of Navigation) was published in 1545. The book was an overview of the existing knowledge on the subject and is regarded as the most influential work of the 16th century on navigation. Even Francis Drake carried a French edition from 1554.