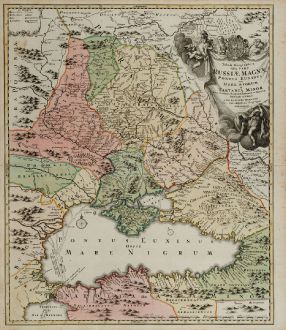 Original old coloured map of the Black Sea region with southern part of Russia and the Ukraine. Extends from Moscow to Constantinople. The waters of the Dnieper and Danube are shown as currents in the Black Sea converging on the Bosporus. With a large figural cartouche showing a black cat in a mirror. Published 1720 by J.B. Homann in Nuremberg.