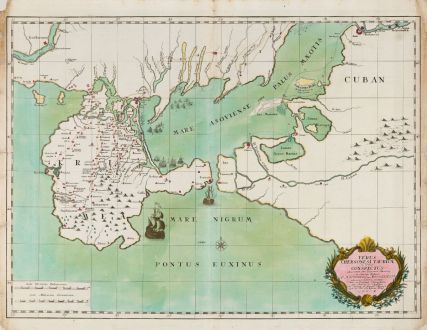 Antoine du Chaffat
Old coloured map of the Crimea, Russo-Turkish War. Printed in Saint Petersburg by Academy of Sciences circa 1740.

Two very rare maps of Crimea with an explanation sheet.

Two old coloured engraved maps of the Russian-Turkish War by Antonie du Chaffat. The maps show parts of the Ukraine, the Black Sea and the Crimea. With military positions and naval associations. On a separate sheet detailed explanations of the marching routes, military camps and the rivers in Latin, French and German.

The maps are based on the maps of Generalfeldmarschall Graf von Münnich and Feldmarschall Lacy and were published by the Russian Academy of Sciences. The maps were reengraved several times, also by Covens & Mortier and Ottens in Amsterdam. The variant of A. du Chaffat appears to be the rarest, probably published in Augsburg. We could locate only a few copies in university libraries.

Due to the large paper size, left and right margins of the maps with some tears, soiling and partly paper losses, restored. Beautiful old colour.

Antonie du Chaffat, also Antony du Chaffat, was a french cartographer, engineer, and engraver, active in the southern part of Germany during the first half of the 18th century.