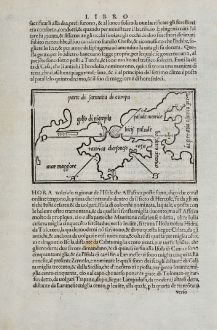 Rare woodcut map of the Crimea by Benedetto Bordone. Showing the Crimean peninsula with parts of the Black Sea, the Sea of Azov and the southern part of the Ukraine.

Benedetto Bordone: Taurica chersonso.
Antique woodcut map of the Crimea. Printed in Venice between 1528 and 1565.