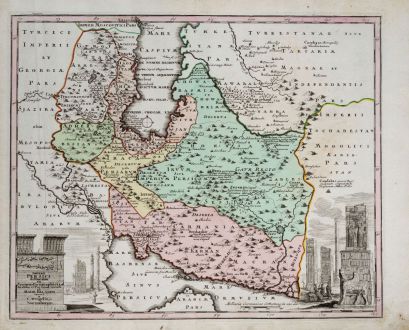 Antique map of Persia by Christoph Weigel. Shows the Iran and the Persian Gulf with the Emirates and the gulf of Oman. Decorated with a beautiful title cartouche. From Bequemer Schul- und Reisen-Atlas also titled Atlas scholasticus et itinerarius by Christoph Weigel. Weigel's well-known travel atlas, which he published in collaboration with Professor Johann David Köhler.

Vertical folds, some staining to the right part.