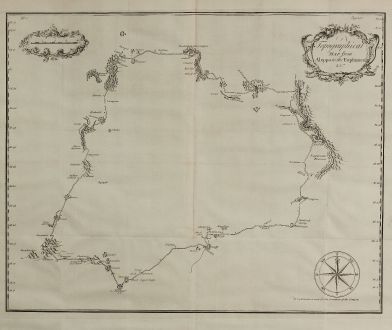 Rare, large map of the region between Aleppo in Syria and the Euphrates. Drummond's map was published in 1754 in his travel report 'Travels through different cities of Germany, Italy, Greece and several parts of Asia'. Drummond describes a hitherto unnoticed route, although it was included in ancient sources.

Evidence of folds as published in a smaller folio. Very good condition.

Alexander Drummond: Topographical Map from Aleppo to the Euphrates & co..
Antique map of Euphrates, Aleppo, Syria. Printed in London by Willam Strahan in 1754.

Middle East - Drummond, Alexander - Topographical Map from Aleppo to the...