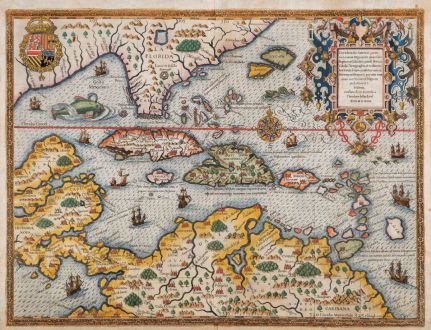 Spectacular 16th Century Map of the West Indies and Florida.

Theodore de Bry's fascinating map of the West Indies is based on the Milanese sailor Girolamo Benzoni, who travelled between 1541 and 1556 in these waters. Florida is derived from that of the Le Moyne map of 1591, with the flat shape of the southern land tongue. It is one of the earliest maps to detail northern South America and one of the few Caribbean maps of the period. The map was engraved to accompany the fourth part of de Bry's Grand Voyages.

The islands of the West Indies are represented disproportionately large, and the Bahamas with the Islands Bahama and Lucaya are placed too far north. The legends indicate the four voyages of Christopher Columbus, and one of the earliest mentions of the Gulf Stream.

One of the most spectacular maps of any part of the world from the [Age of Discovery] is the map Occidentalis Americae partis.... The map is beautiful designed and engraved and very scarce.

Lower decorative border about the half width redrawn and remargined. Some brown spotting mainly in the margins, inconspicuous printer's crease to the right of the lower centerfold. Very good condition with beautiful colors.