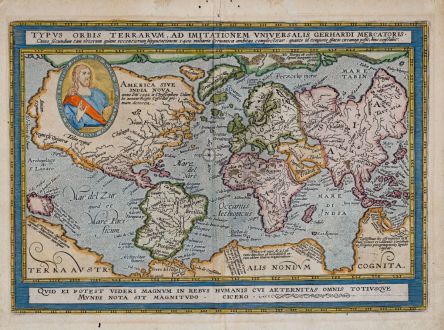 A rare and early world map of Mathias Quad. First published in Matthias Quad's Europae totius orbis terrarum in 1596. This example comes from the Fasciculus Geographicus printed by Johann Bussemacher in Cologne in 1608.

Quad's map has been reduced from Mercator's planispherical map of 1569, with the addition of the figure of Christ in an oval frame in the top left-hand part of the map and a quotation from Cicero at the bottom. South America still has its uncorrected western bulge and Quad has retained the mythical islands of Groclant, Thule, Frischlant and S. Brandam around Greenland

In the south a large Terra Australis Nondum Cognitae is present, which occupies a large part of the southern hemisphere. North America with an unusual west coast and the Northwest Passage. St. Lawrance River is prominently swown and reaches as far as Texas. Japan has a very unusual shape and the Korean peninsula does not exist. Latin text on verso.

Some browning in margins, margins slightly stained and a few small wormholes outside of the image. Very good condition.

Matthias Quad, born in 1557, was a German cartographer active during the late 16th century in Cologne. His main geographical works Europae totius orbis terrarum and Geographisch Handtbuch were published and engraved by Johann Bussemacher. He died in 1613. 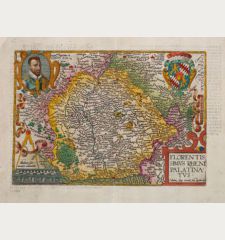 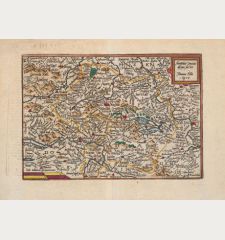 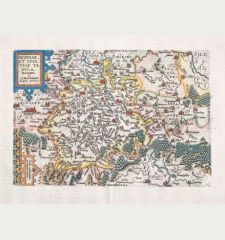 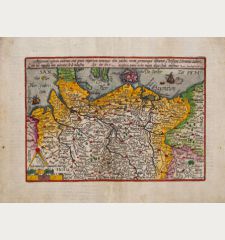