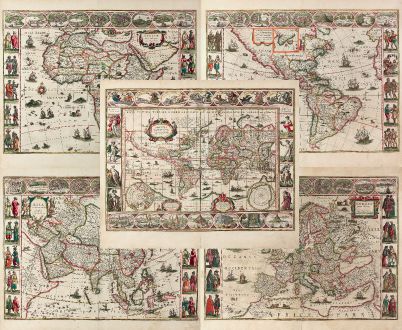 A matching set of the World and the Continents by Willem J. Blaeu

These five maps represent the apogee of seventeenth century Dutch cartography. With their decorative panels of costumed figures, city views and mythological personifications, they helped establish an iconography in the popular imagination which endures to this day. From the most expensive book published in the 17th century, an eleven-volume atlas containing 593 hand-coloured maps.

World 'Nova Totius Terrarum Orbis': Shirley describes this world map as a 'classic single-sheet world map on Mercator's projection... celebrated as one of the supreme examples of the map maker's art'. 'The map has been expertly reduced from the Blaeu's large world map of 1605. The engraver Josua van den Ende signed in the lower right corner. The most striking characteristic are the superb border decorations. Along the top are allegorical of the sun and the moon and the known five planets - Mercury, Venus, Mars, Jupiter and Saturn. Down the sides are, on the left, four panels illustrating the elements (Fire, Water, Air and Earth), and on the right, the four seasons. Along the bottom are seven vignettes showing the seven ancient wonders of the world: the Hanging Gardens of Babylon, the Colossus over the harbour at Rhodos, the Pyramids, the Mausoleum of Halicarnassus at Caria, the Temple of Diane, the Statue of Jupiter, and the conical lighthouse of Alexandria.' (R. Shirley, The Mapping of the World, Entry 255). The map has decorative cartouches for the title, dedication and explanation, two spheres for the north and south poles, a compass roses and numerous ships and sea monsters. It appeared in the Blaeu Atlas from 1630 until 1658. The map was replaced by a two hemispheres world map prepared by Willem's son Joan from 1662 onwards.

Africa 'Africae nova descriptio': Much of the geographical information of this carte-à-figures map is still based on the Ptolemaic maps, with the Nile shown with its source in the Lakes Zaire and Zaflan. Also included are various other mythical lakes and rivers including the famous Lake Sachaf of Laurent Fries. Only coastal towns are named on the Cape, with the printing covering much of the unknown territory. Decorated with a title cartouche, elephants, lions, ostriches on the land areas, and galleons and sea monsters on the sea. With vignette scenes of regional types to the left and right and cities along the top border.

America 'Americae nova Tabula': The delineation of the coast are basically Spanish in origin and follow the maps of Ortelius and Wytfliet. Willem Blaeu has added the English names on the East Coast given by the Roanoke colonists in Virginia and by Frobisher, Davis and Hudson to the far north. He has added French names in Florida and along the St Lawrence. European geographers still had no knowledge of the extent of the Mississippi. From the expedition journals of De Soto (1539-43) they had inferred an extensive range of east west trending mountains north of the Gulf of Mexico, precluding any great river system. The Great Lakes were unknown. With an inlay map of Greenland. Decorated with a title cartouche, natives on the South America land area, and galleons and sea monsters on the sea. With vignette scenes of regional types to the left and right and nine city views along the top border.

Asia 'Asia noviter delineata': This map is a reduced version of Blaeu's 1608 Asia wall map and first published separately in 1617. The map contains extensive details showing what was known of Asia in the early 17th century. Since the Blaeu family were official cartographers to the United East India Company from 1633, their Asia maps have been continuously improved. But the map still has errors, e.g. Korea is still an island. Japan has a predominantly east to west direction and Australia has yet to appear. In China, the Great Wall is shown. Decorated with a figural title cartouche, elephants, lions, camels on the land areas, and galleons and sea monsters on the sea. With vignette scenes of regional types to the left and right and nine city views along the top border.

Europe 'Europa recens descripta': This single-sheet versions of Blaeu's 1608 Europe wall map were first published separately in 1617.. The mythical island of Frisland still appears between Iceland and Greenland. Decorated with a figural title cartouche, bears and lions on the land areas, and galleons and sea monsters on the sea. With vignette scenes of regional types to the left and right and nine city views along the top border showing Amsterdam, Prague, Constantinople, Venice, Rome, Paris, London, Toledo and Lisbon.