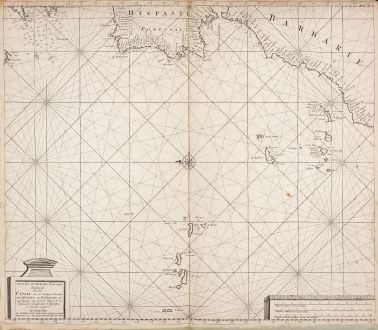 Very rare nautical chart of the north-eastern Atlantic by Johannes Loots. Shows the coastline from Southern Ireland, Cornwall, Brittany, Spain, Portugal and the northwest coast of Africa to Cape Bojador. With the Canary Islands, the Azores and Madeira. With a title cartouche, a mileage scale and a compass rose surrounded by rhumb lines.

Old doubled on blue paper. Nautical charts not bound in atlases and intended for navigation at sea were often reinforced with a second sheet, as seen here. This made them easier to handle and a suitable set of different maps could be taken along on the planned voyage.

The example of this chart of the Atlantic from the Library of Congress, apart from the one offered here, is the only one worldwide we could locate. Neither in the trade of the past 40 years nor in other public collections this sea chart by Loots can be found.

Johannes Loots was a publisher of nautical charts active in Amsterdam around 1700. Loots was apprenticed to Hendrick Doncker in the 1680's and originally made nautical instruments. In 1693 he was admitted to the Guild of Booksellers and began publishing nautical charts and atlases. His shop in Amsterdam was on the same street as the publishing house of Johannes van Keulen and Hendrick Doncker.