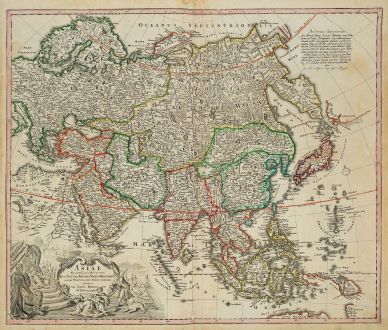 Early antique map of Asia by Johann Baptist Homann. With Kamchatka already drawn as a peninsular. Compagnie Land to the upper right could be an early representation of Alaska or a misrepresentation of Hokkaido. With an outline of Nova Hollandia and Carpentaria, both parts of Australia. Also mentioned the Dampier Strait, named Dampieri, separates New Guinea and New Britain. Decorated with a beautiful title cartouche showing a Sultan on his throne.