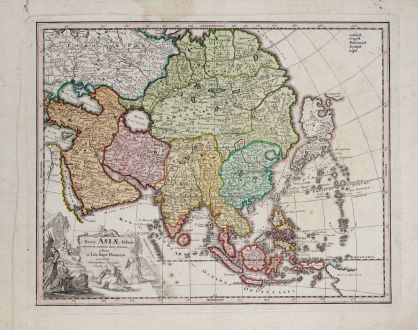 Scarce map of Asia by Christoph Weigel after J. B. Homann. Still without Kamchatka, but with the big island of Terra Yedso above Japan. Compagnie Land to the upper right could be an early representation of Alaska or a misrepresentation of Hokkaido. With an outline of Nova Hollandia and Carpentaria, both parts of Australia. Also mentioned the Dampier Strait, named Dampieri, separates New Guinea and New Britain. Decorated with a beautiful title cartouche. From Bequemer Schul- und Reisen-Atlas also titled Atlas scholasticus et itinerarius by Christoph Weigel. Weigel's well-known travel atlas, which he published in collaboration with Professor Johann David Köhler.

Some minor staining maily in the margins. Very good condition.