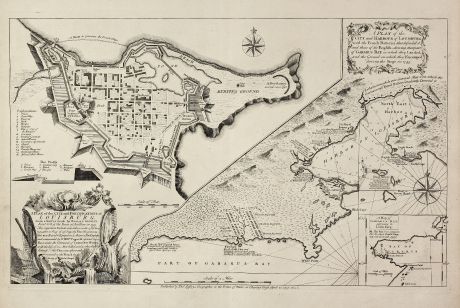 A Plan of the City, and Fortifications, of Louisburg, from a Survey made by Richard...

The copper engraved map published by Thomas Jefferys in 1757 showing the Siege of Louisbourg, which took place in 1745 when a New England Colonial force aided by a British fleet captured Louisbourg on the island of Île-Royale (now called Cape Breton Island) from its French defenders during the War of the Austrian Succession, known as King George's War in the British colonies. The map has a large inset at left: "A Plan of the City and Fortifications of Louisburg ..." and a smaller inset of Gabarus Bay.


We only could locate one copy of this 1757 first state of the map world wide. It can be found in the British Library. There is a second state of the map depicting the siege of 1758, which appears more frequently.

Dark and clear impression on strong paper. Perfect condition. It is quite unusual to find a separate published map in such preservation.

Thomas Jefferys was an english cartographer and publisher. He produced one of the finest maps of the time of the West Indies and North America. Jefferys also published english country maps.

North America - Jefferys, Thomas - A Plan of the City, and Fortifications, of...